With its miles of pristine sandy beaches, beautiful historical hotels, and some of the finest entertainment found in the area, the city of Coronado lives up to its name as the crown jewel of the San Diego metro. Situated just across the bay from downtown San Diego proper, Coronado sits on a tiny spit of land jutting out from the mainland to create one of the country’s biggest and most strategically important natural bays.

The lack of real estate in this prime location has resulted in an abundance of small beach bungalow-type homes, giving the city a small beach town character despite its proximity to San Diego. This miniaturization has presented homeowners with a unique problem, however: there just isn’t enough space for everything!

To solve this problem, one Coronado homeowner decided that if their home’s interior couldn’t fit everything he wanted, they’d just extend their living space into their yard. To turn their boring backyard into the ideal outdoor living room, they enlisted the help of Torrey Pines Landscape Company to draw up the plans and get the project underway.

Before the project broke ground, the yard space was fairly barebones: a lawn broken only by a brick footpath through its center, a small fire feature sitting in a section of gravel bordering one fence, and a pergola overhanging a small brick patio situated on the opposite fence. The project would focus on turning this small, empty space into a full-fledged entertainment area.

The project began by removing the majority of the lawn, the brick footpath, and the gravel area in favor of an extended patio that would cover the majority of the yard space. The pink brick used in the original footpath would criss-cross the patio, while new slate stone tiles would make up the body of the flooring.

The fire feature experienced a major upgrade, going from the typical brick firepit you’d find on a public beach to a large outdoor fireplace complete with mantle, brick chimney, and a slanted tile roof that matched the style of the home. The structure’s facade utilizes slate flagstones, bordered on each corner with dusted red brick.

Sitting opposite the upgraded fire feature, the pergola would remain in place, though the patio it sheltered would experience a drastic change. To fill the empty space, a full outdoor kitchen was installed to provide sustenance for the homeowner and guests, including a six-burner barbeque, a two-burner stovetop, a refrigerator, and a sink.

The stainless steel appliances were installed into a custom hardscape cooking island, whose facade used the same slate flagstones as the upgraded fire feature. The island featured a double-decked countertop made of creamy-colored speckled granite featuring a slate brick backdrop in between levels. 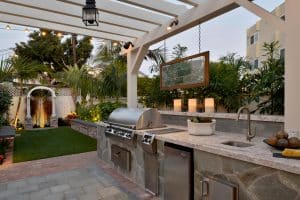 To round out the yard, the perimeter would be lined with raised, rustic brick planters featuring a number of tall, broad-leafed tropical foliage, palms, and flowers. A raised wooden arch was added as a focal point for the one small area of lawn that was kept, bordering the side of the house.

New lighting fixtures were then added to provide partygoers and occupants relaxing in the dying light of the day with plenty of visibility. To cap it all off, heaters were installed facing the outdoor kitchen and the lounge area facing the fire feature to ensure maximum comfort, even during chilly winter nights when the ocean breeze comes rustling inland.

With the landscaping work finished, the homeowner furnished the new lounge area with dark wicker couches and loveseats facing their new fireplace. The outdoor living room was complete, and it had all the creature comforts of a cozy interior.

If you have a yard of your dreams, don’t let it go cooped up in your head. Torrey Pines Landscape Company’s specialty is turning your fantasy garden into your real-life outdoor playground!