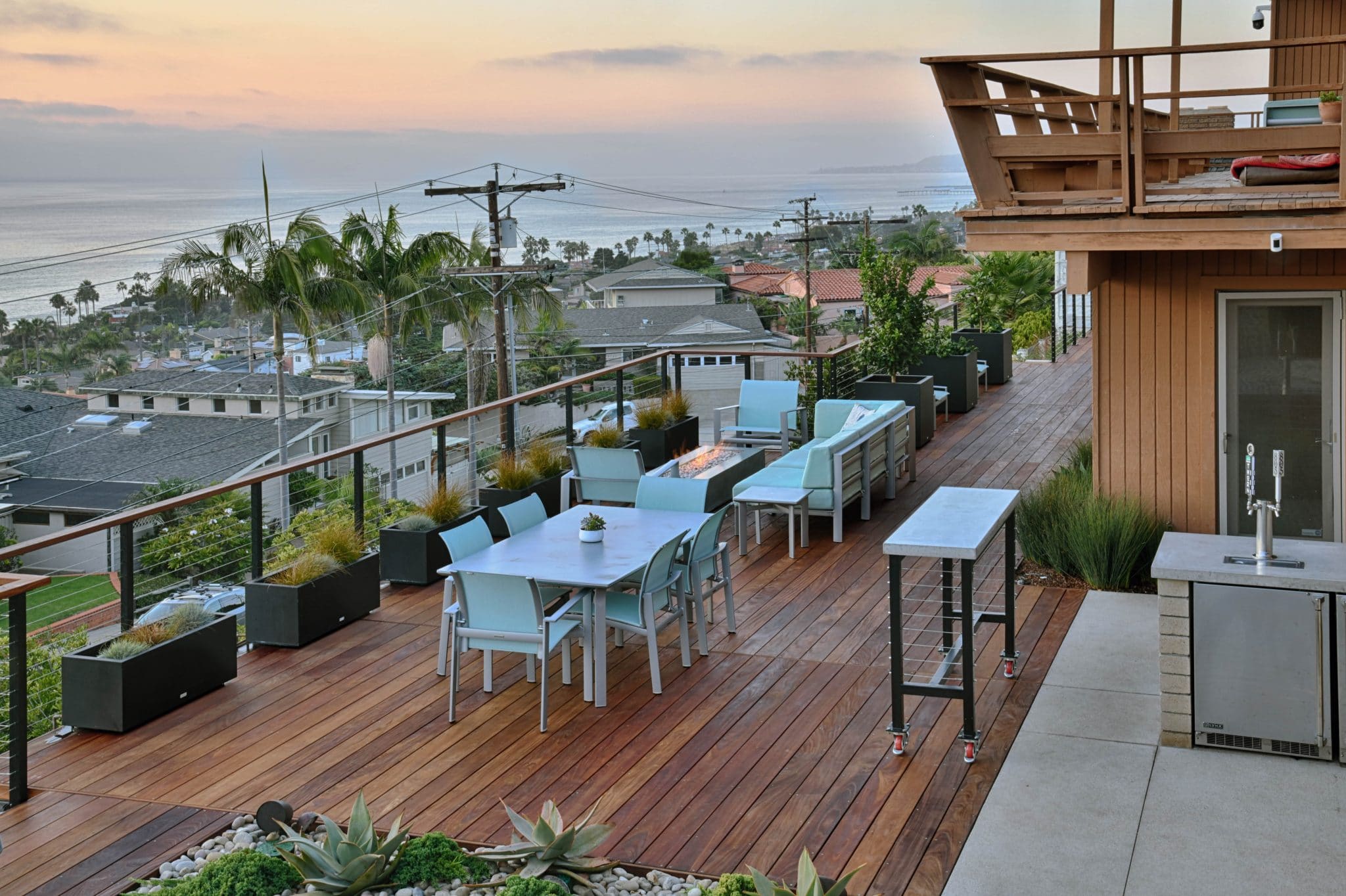 The Point Loma Peninsula represents some of the most beautiful and picturesque coastlines in the United States, with its rugged cliffs and sandy beaches providing stunning views of a coastal sunset. It’s easy to get lost in the sensory memories of such a magical place; the cries of gulls only briefly muffled by the crashing of waves as a cool sea breeze brings the familiar scent of salt to your nose, watching the colors of a dying day transform from gold and pink to red-orange, then finally to purple as the sun dips further beneath the horizon.

What better way to watch this miracle of nature than from the comfort of the deck of your own home? That was the idea of this Point Loma homeowner, whose elevated property on the rolling hills of the peninsula afforded spectacular views of the Pacific sunset. To make the most of the location, they didn’t just want a deck– they needed a luxurious entertainment and dining area in which they could both socialize and fully absorb the beauty of the moment.

The homeowners got in contact with award-winning Torrey Pines Landscaping Company, who quickly set to work planning out the project. It was decided that the deck would be sectioned in three distinct areas – a fully contemporary spa, an outdoor kitchen, and a private space for dining, drinks, and socialization. After a few brief modifications to the plans, the construction began! 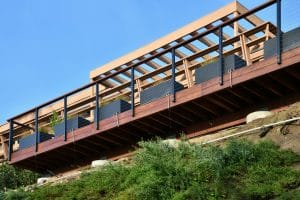 The deck itself would be constructed using cantilevered Ipe wood for both support and walking planks. Bordering the deck is a bannister made from polished Ipe, steel posts and stainless-steel cable railings to maximize visibility while providing a sturdy barrier for the safety of everyone on-deck. This combination of Ipe and steel provides continuity across the deck, with many of the storage screens and privacy walls bordering the back and sides of the deck make use of it. The barrier is intermittently visually interrupted by solid black planters containing various types of fruiting citrus trees. 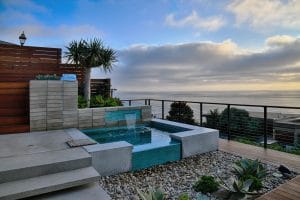 The multilevel spa uses a contemporary design, with concrete floating steps leading to a small pool that utilizes blue tile to provide visual contrast with the material around it. A waterfall spout provides the pool with water that then overflows into a hidden reservoir contained underneath the bordering river stone planter. The raised, piled-tile planters adjacent to the spa contain both local southern California flora and a dragon tree to break up the visual continuity. 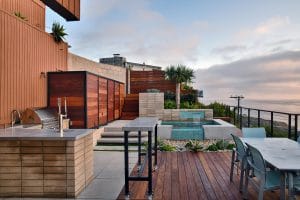 The outdoor kitchen area is bifurcated into two parts, with one end floored with concrete tiling and containing a counter space constructed of piled sandstone tiles with granite countertop and stainless-steel appliances, the other utilizing Ipe decking and containing a dining area complete with furnishings, firepit, and planters. The kitchen area contains a 6-burner barbeque, farmhouse-style sink, and the all-important craft beer taps and keg storage area. For some extra counter space for dining or cooking prep, Torrey Pines worked with fabricators to make a custom movable bar utilizing the same granite countertop and powdered black steel posts. 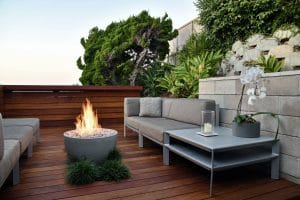 The final wing of the deck is dedicated to a hidden nook with adjoining Ipe privacy screen that allows for a more intimate setting to avoid prying eyes. Torrey Pines purchased a Paloform fire pit as a centerpiece for the nook, nestling it in a small bed of local greens poking out of a break in the deck. The nook is sheltered from the hillside that borders it with a wall of concrete blocks of various shapes and planters containing local flora. 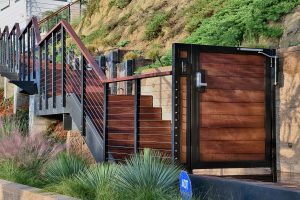 The deck connects to the street below via a staircase that connects to both the dining area and the private nook. The skeleton of the stairway is made entirely of black powdered steel and based in inset concrete slabs attached to the hillside. The steps once again utilize Ipe planks, making a tantalizing path upwards towards the deck. 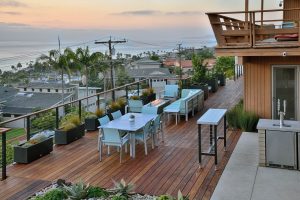 With the project complete, the homeowners could enjoy the fine San Diego weather and famous Pacific sunsets in a variety of ways: relaxing in a steamy spa, dining in style overlooking the crashing waves, or just enjoying an early night in with their private fire pit. Another day, another mission accomplished for Torrey Pines Landscape Company!