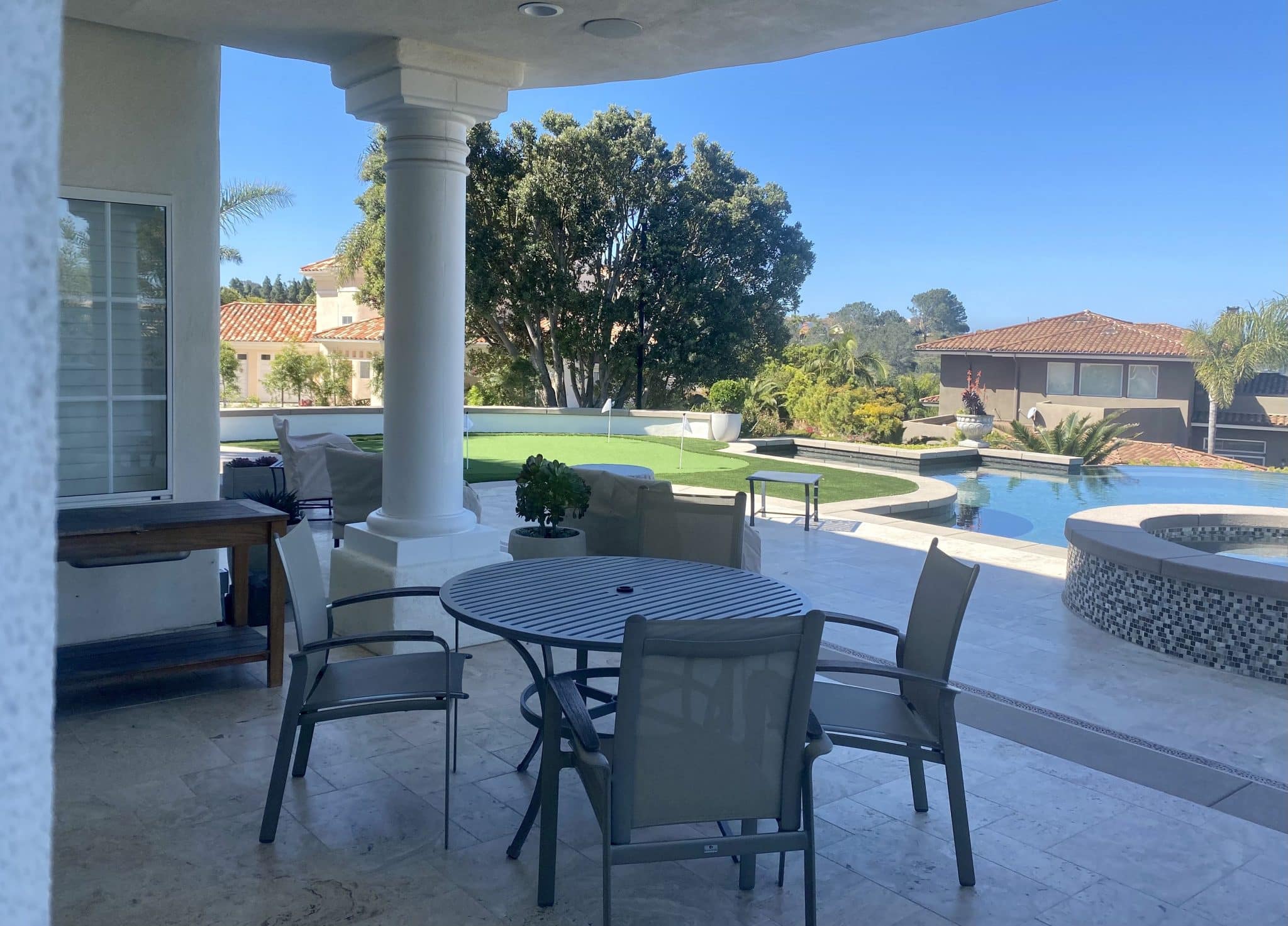 Even high-end developers can make mistakes when building or designing new homes, especially when faced with a tough topography that makes level development impossible. Planning out every nook and cranny of a neighborhood isn’t possible, and even the best-laid plans can run into unforeseen circumstances.

Take, for example, this Carmel Valley home situated in the beautiful-yet-rugged hilltops bordering the Torrey Pines Lagoon. Though the ocean view from the property’s backyard is to die for, the landscaping left much to be desired.

Built as it was on the hillside, the landscaping was broken up by a number of elevation changes that were poorly incorporated into the design. This created a disjointed look and feel for the outdoor space as well as poor functionality – guests would need to carefully traverse the yard lest they get tripped up and fall.

Tired of not being able to enjoy their ocean view as they felt they should, the owners of the property decided to take matters into their own hands and create a more functional landscape. To accomplish this, they enlisted the help of Torrey Pines Landscape Company to draw up some plans and get the work started. 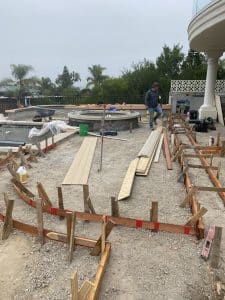 The first problem to take care of was the built-in spa. In the original design, the spa was on the complete opposite side of the garden from the ocean view, meaning that a relaxing dip in the hot tub would not include the best feature of the location.

To fix this, Torrey Pines removed the spa and built it into a more central location at the head of the pool area, which they expanded inwards towards the outer doors of the house. New travertine tiles were utilized in the expansion, creating a full, connected patio that bordered the pool and provided flooring for a new compact outdoor kitchen.

The outdoor kitchen utilizes a small, 6-burner stainless steel barbeque built-in to a newly minted gray and white marbled countertop. A masonry breeze block backsplash for the kitchen provides an aesthetic divider between properties that provides both a privacy screen and some welcome cross breeze for the cook during the hot summer months.

To soften the elevation changes and keep a consistent look for the yard, Torrey Pines created a number of broad-stepped staircases using thick-cut sandstone blocks and tiles. These same blocks would be used to border the patio area, poolside decking, and to top the seating walls that now crisscrossed the outdoor space. 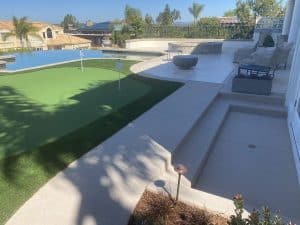 With the new outdoor kitchen and seating walls, the yard was more than ready to accommodate large gatherings to enjoy the new central spa and pool area. With the elevation changes fully incorporated into the design or leveled out, guests could walk through the yard space with confidence.

With the backyard taken care of, the homeowners decided to get the front of the house revamped as well. The property initially gave the illusion of looming over those approaching from the front, as the home itself is quite tall and is raised an additional 10 feet above the street level due to its position on the top of the sloping hills.

This presented a challenge: given the limited space available between the home and street, its steep rise, and the imposing sensation these combined factors gave off, how could the landscaping be changed to soften this look and feel? Torrey Pines’ answer to this was creating a far more intricate entryway that utilized multiple walled ramps that lead to a series of open central landings separated by small staircases.

To match the home’s white exterior and the existing hardscapes of the backyard, the walls were constructed with cement the color of white adobe, while sandstone and travertine tiles were used for the flooring. Lighting fixtures were added to the walls to provide easy visibility at night, capped with two modernist lamp posts resting on the square columns that bookend the walls..

The new entryway creates a series of tiers that creates an easier elevation change for visitors than a straight staircase would. It also provides a greater sense of depth for those approaching the house, softening the sensation of looming the house originally gave off while simultaneously making it seem more welcoming. 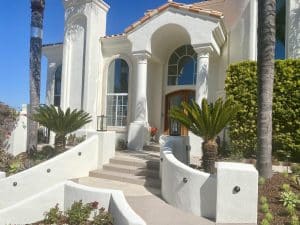 To accentuate the new hardscape, planters were added to provide soothing greenery to the walkways. The front planter used a variety of flowers and flowering shrubs, while the back planters used miniature palms that were just tall enough to peek over the newly added walls of the central landings.

With that, the work was completed. In the words of the homeowner, the outside of the home had been transformed from ‘just alright’ to ‘totally awesome’. It finally had an exterior that was worthy of the location and the beauty of its interior. Another successful project under the belt for Torrey Pines Landscape Company!